For full functionality of this site it is necessary to enable Cookies.

Here are the instructions for how to enable Cookies in your web browser.

Invest in the Venezia FC Bond

This offer has now closed

7.5% interest per annum
Paid annually on the anniversary of the bond
15% cash bonus
Upon the Club returning to Serie A within the bond term
5 Years
Initial fixed-term
€1,000 minimum investment
Thereafter in €1,000 increments

Founded in 1907, Venezia FC is a historic Italian football Club based in of one of the world's most iconic cities.

Nicknamed the "Arancio-nero-verdi", Venezia FC is led by a passionate Ownership group and a dedicated Leadership team, who share a love for the Club and City alike.

Since taking charge of the Club in early 2020, the Club's management has put in place a strategy that is already delivering, bringing financial stability and continuity in the Club's governance.

Central to this strategy, and the investment for the next phase of growth, is the development of a state-of-the-art training center at Taliercio. The center will bring together the entire Venezia FC family - from the Men's and Women's First Team to the Academy, as well as its management and staff.

Work has already begun on the development of the new training center, with the Ownership providing all of the funding until such time that they believed the Club has reached financial stability.

As the Club moves into a new phase focused on the long-term future, the Ownership now invites Venezia FC's supporters, its local and global community, and all investors, to invest in the Venezia FC Bond alongside the Club.

Funds raised from the Venezia FC Bond will directly finance the construction of the new training center at Taliercio. The building will include additional training pitches, locker rooms, gym, medical and rehabilitation facilities, and the new Club headquarters.

To view this information you must have logged-in and completed your self-certification. Click here to login or register. You will be prompted to self-certify if necessary.

Investors in the Venezia FC Bond will be entitled to a range of Bondholder Privileges based on the level of ther investment. All priviliges are cumulative.

Note: Some privileges are limited, as highlighted in red below the description.

Please note that all privileges are one-off, with the exception of those noted here - personalised video messages (one per year), player experience tranining session (twice during the bond term) and priority rights on VIP tickets (lifelong) 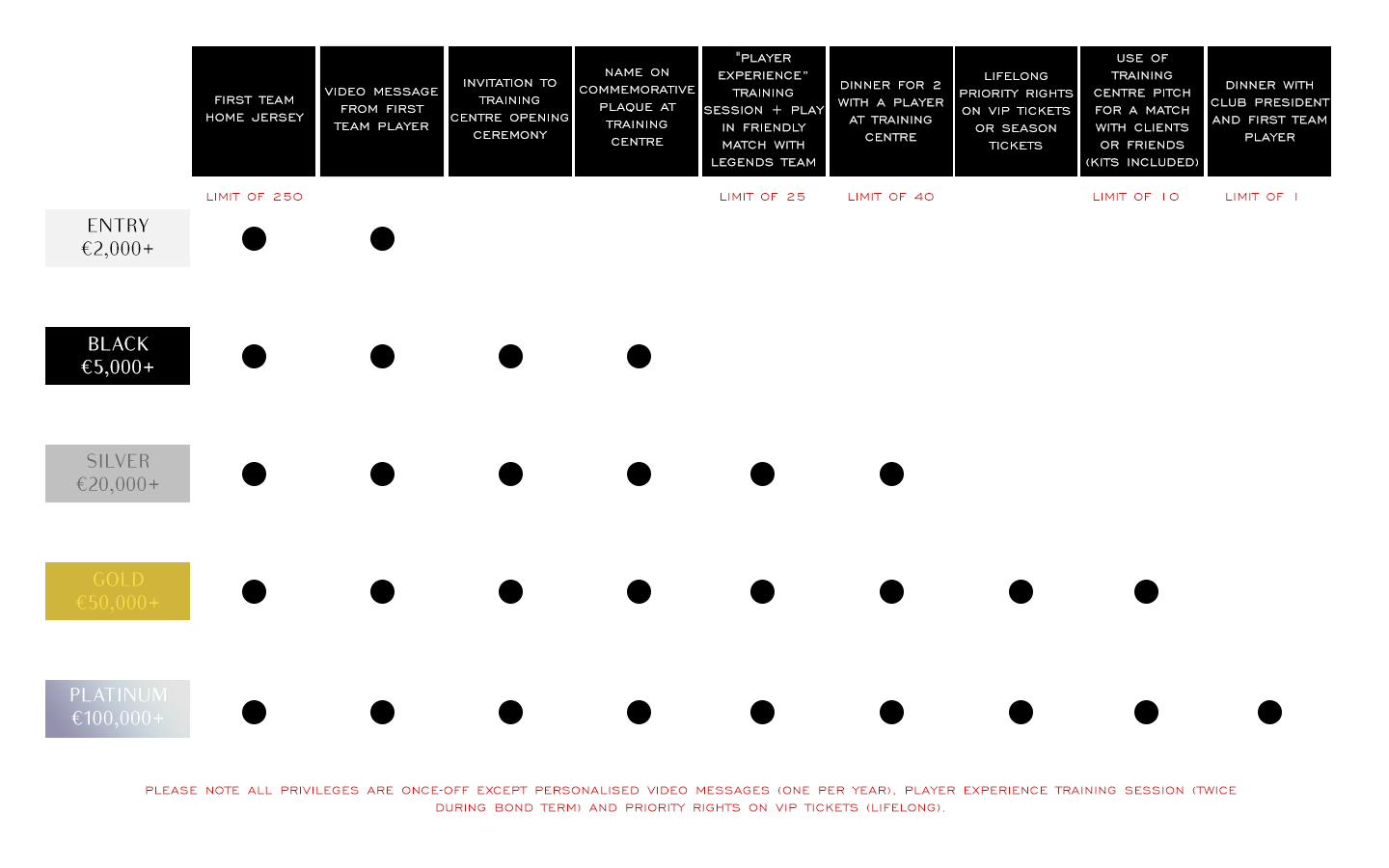 Duncan has held the role of President of Venezia FC since early 2020. He is the former CEO of NYSE Euronext where he served from 2007 to 2014.  Prior to that, he was a partner of Goldman Sachs, & Co. from 1985 to 2007.  His career has been defined by his ability to innovate, advise, and successfully execute traditional and disruptive business models.  A leading figure in the industry, he has received numerous career distinctions and honors, most notably the John C. Whitehead Award for Leadership.  In 2013, he was recognized as an Honorary Commander of the British Empire (CBE) by her majesty, Queen Elizabeth II, for his efforts to advance the peace process in Northern Ireland.

He is a founder and managing member of Transcend Capital Advisors and a co-founder of Communitas Capital Partners.

Barney and his family have been investors in Venezia FC since 2017. They are also the principal owners of the Oakland Roots SC, a football team that currently plays in the USL (the US second division), not far from their home in Northern California. Barney is currently the Head of Labs at Nephila, a specialty investment firm, where he has worked in a range of senior management roles since joining in 2004. Prior to that, he worked in the Risk Markets Group at Goldman Sachs, & Co. from 1996 to 2002. His professional focus has been on risk management and decision-making in the context of a changing climate. Barney also serves as the Chair of the Board of Ceres, a non-profit dedicated to sustainable capitalism, and in a variety of other board and advisory roles for technology and insurance-related ventures.

Ian is the Founding Partner of Sandia Holdings, the principal investing arm of the McKinnon family and related entities. Prior to Sandia, he spent nearly twenty years at Ziff Brothers Investments, from which he retired in 2014 as Managing Partner.  He remains active in technology and life sciences investing, with a particular emphasis in oncology-related therapies. He also has a passion for professional sports, as he is one of the Founding Partners of TEAM8, the sports management company which created the Laver Cup of professional tennis, and one of the Founding Partners of New Mexico United, which competes in the USL. Ian received a BA in Public Policy, summa cum laude, from Occidental College, and an MBA from Harvard Business School as a Baker Scholar.  He was also a finalist for both the Rhodes and Marshall Scholarships.

Mr. Fay has been an investor in VFC since 2018. In 2020 he stepped in to offer his business management services to the front office operations. Mr. Fay previously held international executive management positions in Chubb, AIG/AIU (Paris, France); A&A now Aon and Arkwright/Hobbs Group. In 1993 he founded Globex International Group. The company provides specialized multinational insurance services to brokers and underwriters worldwide. Mr. Fay also owns and consults on a number of other businesses including hospitality, sporting, boutique, brewery, yacht charter, online apparel and audio/electrical. He is known for his expertise in growth business planning and expense management. Doug is a philanthropist to many foundations including Champions Place, a home for adults with physical disabilities. Mentoring youth and young talent in business is one of his ongoing passions.

Member of the Board and Investor

Member of the Board and Investor

Ivan spent 13 seasons at Inter Milan between 1999 and 2012 entering the Club’s history books with an incredible CV that includes 1 Champions League, 1 Club World Cup, 5 Serie A titles, 4 Italian Cups and 4 Italian Super Cups,  as well as winning 1 Copa America with the Colombian national team. In 2005 Ivan founded "Colombia te quiere ver", an association for blind children living in a state of poverty, as well as commitments to many more social initiatives.

On February 2021 Cordoba joined the Board of Directors of Venezia FC to strengthen the club's DNA at all levels; from the sporting side to the development of relationships with other clubs, leagues and institutions across the global football ecosystem.

Expand All  |  Close All

About the Venezia FC Bonds

About the Venezia FC Bonds

Why is Venezia FC issuing a Bond?

The Venezia FC Bond is being offered in order to to increase the involvement of supporters and investors, granting them the chance to co-invest together with the Ownership in the Club's future success.

What will the funds raised from the Venezia FC Bond be used for?

Funds raised through the Venezia FC Bond will be fully allocated to the development of the Club's new training center site with state-of-the-art facilities for its mens'and womens'teams, as well as academy, management and staff.

Will I get a certificate?

All successful Applicants will receive an electronic-form Bond Certificate. The Bond Certificate will also be issued in paper-form and, unless otherwise requested by the investor, will be stored at the Club's headquarters.

What happens if the Venezia FC Bond is oversubscribed?

The Issuer reserves the absolute discretion as to whether to accept your Application for Bonds in whole or in part (subject to a minimum amount of €1.000 per Application). Applications will be reviewed on a first-come-first-served basis.

Who can invest in the Venezia FC Bond?

Applicants must (i) be over the age of 18 at the time of making an Application; (ii) complete self-certification (i.e. selecting one of the pre-defined investor categories); and (iii) complete the investor questionnaire should they be required to do so.

Can companies invest in the Venezia FC Bond?

Yes, but only through a legal representative. When investing, simply indicate that you will be investing in a professional capacity at the relevant step within the online investment process.

Are there risks involved with investing?

Venezia FC Bonds represent an investment opportunity and therefore your capital is at risk and returns cannot be guaranteed. The risks and significant considerations involved in investing are made clear at every stage of the investment process. Any decision to invest in the Venezia FC Bond should be made solely on the basis of a careful review of the Offer Document which will be available at www.tifosy.com/veneziafc once the investment period begins.

Do I need to discuss the Offer with a financial advisor?

If you do not understand any terms of the Offer you are strongly recommended to seek the advice of an independent financial advisor. The Venezia FC Bond may not be a suitable investment for everyone. If you choose to invest, your investment should only be made as part of a well-diversified portfolio. You should also obtain your own tax advice as to the consequences of owning and selling Bonds as well as receiving interest payments.

Don't invest unless you're prepared to lose all your money invested. This is a high-risk investment. You could lose all the money you invest and are unlikely to be protected if something goes wrong. Take 2min to learn more.